Hello!
I can't believe I haven't blogged since May, when I was 34 weeks pregnant. Life kind of got in the way - as happens so often! Since May, I have of course given birth to my beautiful baby girl, Jessica, and she's now 20 weeks old.
I've been looking to get back into blogging for a while now and, after talking to some friends and family, I've decided that now is as good a time as any. I'm planning on writing a series of posts on how I've found the first few months of motherhood; from my labour to my post-baby body, feeding and bonding, mental health and my recovery.
So, let's start from the beginning: the labour.
I was due to give birth on June 23rd but Jessica actually arrived on July 2nd - 9 days late. I was booked in for an induction and Mum drove us both to the hospital, having only experienced a couple of twinges in the lead up to my labour, feeling excited but very apprehensive about what was to come. The house was totally prepared and we were all looking forwards to meeting our little one.
We arrived at the hospital at around lunchtime; I was weighed, monitored (only about 2cm dilated) and left to relax for about an hour - as there was no sign of the baby arriving by herself, my waters were artificially broken at about 1pm. It didn't hurt and there was no big gush of water, in fact it just felt like I'd wet myself.
The midwife sent S & I off to go for a walk around the hospital grounds to try and get things started, as they wanted to avoid giving me a pessary, and after an hour of wandering about in the park opposite the hospital, with S and my Mum, we went back to the ward. About an hour later, halfway through a piece of chocolate, at around 3pm, I had my first contraction.
When people say it feels like intense period pain - they're right... at the beginning. The first couple of hours of contractions were just like horrible cramps; I couldn't eat as it was so painful and I couldn't find a position I was comfortable in. Once we were admitted to our own private room, my Mum was allowed in too and she and S were both amazing support throughout. I couldn't have asked for better birthing partners.
I started on gas and air once I was in my private room, and it did offer some relief in the early stages. I don't remember when it happened, but I was given diamorphine at some point which helped to dull the pain, but also made me incredibly sleepy - especially when combined with the gas and air for contractions. Throughout, my contractions were only about a minute apart, which was tough as it meant I had no relief in between them.
The room we were in was brightly lit, there was a fan whirring away as it was one of the hottest days of the year, there was a television, plenty of water and lots of room for me to walk about. However, I couldn't really walk as my contractions were right in my back. At around 9.30pm, I asked for an epidural. The pain was unbelievable and I couldn't see myself being able to carry on like that. As the midwife was discussing the epidural with the anaesthetist, I felt my contractions change - "I feel like I need to push!" I shouted. The midwife rushed over and had a look; yep, I was 10cm dilated and ready to push.
As it was too late for an epidural, I had to (literally) push on with just gas & air, and the previously administered diamorphine. As my only experience of childbirth so far had been watching One Born Every Minute, I was under the impression that after hours or contractions, you simply push a few times and the baby is born. How wrong I was. Midwives will allow you to push for up to 2 hours before they have to take emergency action.
After an hour of agonising pushing, Jessica was born, thankfully without any forceps or cutting, at 10:56pm, weighing a chunky 8lbs 9.5oz. That relief when they pull the baby from you is indescribable; the pain stops instantly (but not for long, unfortunately!) and instead you're overrun by a feeling that you just need to focus on your baby now. 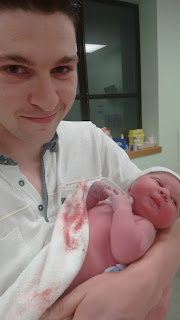 Proud Daddy with his minutes old baby.
Jessica didn't cry immediately and, after a couple of seconds on my bare chest, was rushed over to a table in the corner of the room where she, thankfully, started crying. After having a few cuddles with Jessica, and having to push the placenta out (am I the only one who thought it just fell out?!) a doctor came in and did my stitches as I'd had an internal tear. 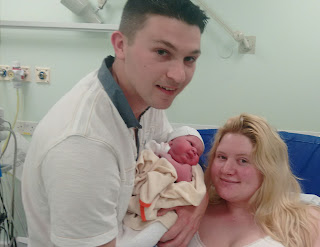 An hour later, as S and my Mum left, I showered and headed off (when I say 'headed', I actually mean 'waddled', walking isn't too easy when you've just given birth and had stitches!) to spend my first night with my beautiful healthy baby girl in the hospital. 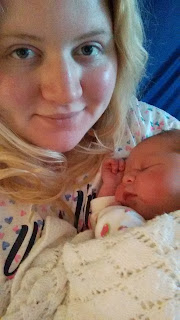 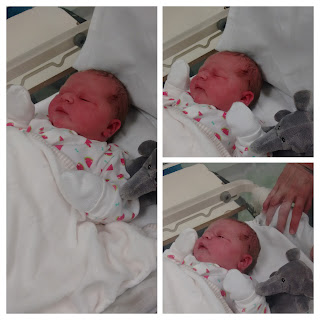 I hope you've enjoyed reading my birthing story. It was the hardest, most painful, experience of my life so far but it's incredible what you gain in those hours or days - not just a baby, but so much strength and so much pride in yourself and so much love for those who helped you through it.
Next time, I'll be discussing how I found feeding Jessica.
Posted by Unknown at Friday, November 20, 2015 No comments:

It's a whole four weeks since I published my 30 Week Pregnancy Update, although it feels like it was just yesterday! Time is flying by and my little baby girl is now due in just 40 days! [Insert swearwords of your choice here].

If you follow me on Twitter, you'll probably be so sick of my constant tweets moaning about how tired I am, how much my back and hips hurt, and how crappy I feel. I had a lovely back massage last week though and that has really helped to ease my back pain - I'd definitely recommend getting one if you're struggling!

I've been exhausted after work recently and yesterday I had to take an extra fifteen minute break to sit in the spare testing room with the air conditioning on full blast as I was all hot and bothered. How glamorous.

I've been getting really impatient and snappy over the last week or so and I'm starting to feel really sorry for S who has to cope with my horrible half hours where I scream and shout about absolutely nothing. I cringe so much when I think about it - I honestly sound like a woman possessed when I lose my temper!

How do I look?

Well, I've put on another 5 or 6lbs in the last four weeks, so I'm now almost one stone over my starting weight, which sounds like a lot to me - but everyone has reassured me that its totally normal, so I'm trying not to worry. I hate being that person who is bothered about how they look during pregnancy - at the end of the day, it really doesn't matter - but it's quite hard not to let it bother you at all.

The nursery, Moses basket and pushchair are all set up, our hospital bag is packed and all the babies clothes and blankets have been washed and dried, so I think we're just about ready in terms of the materialistic things.

Mentally, I am so not ready. It still hasn't sunk in that, in just over a month, we will have a baby here with us... I still can't picture it, but soon I won't even have to imagine!

I start my maternity leave at the end of next week, which just seems mad. I can't believe it's nearly four months since I told work - it seems like two minutes ago! I'm so ready to start my maternity leave though as I'm feeling so knackered and I need to make the most of having some time to myself to sleep, see friends and watch my favourite TV shows, before the little one arrives and everything descends into (beautiful) chaos!

** Apologies for the lack of photographs. They keep turning out awful quality when I upload them onto blog posts. I'm in the process of looking into buying a new camera so, bare with. **
Posted by Unknown at Thursday, May 14, 2015 No comments:

Here's a quick rundown of what has been making me happy recently, from food to make-up, books to films!
What's floating my boat?

Reading: I've been getting stuck in to A Force To Be Reckoned With: A History of the Women's Institute by Jane Robinson for a couple of weeks now, and I'm really enjoying it. The WI has always intrigued me - not only do they love tea and cake, but they have done so much incredible work over the years and it's so interesting to learn about. I'm expecting to finish this book this week, so I'll post a review - see if it sounds like your kind of thing!

Watching: I've been really getting back into my TV lately, as a result of poor nights' sleep and, therefore, spending the rest of my days off on the sofa! I'm re-watching Peep Show from the beginning, I'm really enjoying ITV's new drama Home Fires which is about the WI (do you see a theme going on here?!) and, as recommended by my sister, Jane the Virgin which is a new comedy on E4. Film-wise, I watched Kingsman yesterday with S and it was brilliant - funny and action-packed!

Eating and Drinking: It would be a lot faster simply to list what I haven't been eating recently, as I've been hungry 24/7! I've been trying to incorporate more fruit into my diet in the form of smoothies, and I'll be sharing some recipes over the weekend. I've not had much energy to prepare any fancy meals, but S and I had a tasty Mexican inspired cottage pie last week, which I blogged about here.

Beauty: I finished my Snow Fairy shower gel this week and I miss the smell of it already! I wish I had stocked up whilst it was still available... I'll just have to wait until next Christmas and then hit Lush! I've really been loving a new lipstick that I picked up in Superdrug recently - it's L'Oreal Paris Color Riche in the shade 'Julianne's Nude'. It's a gorgeous, subtle dusty rose colour and its perfect for pale girls like me who want to add a pop of colour without overdoing it.

What have you been loving lately?
Posted by Unknown at Monday, May 11, 2015 No comments: